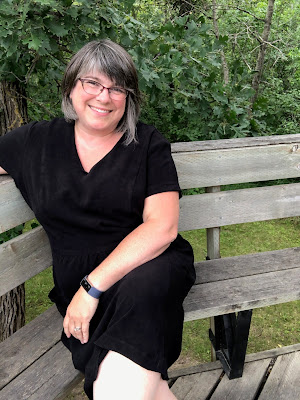 Hello all!  So it's been a few weeks since I've posted, but all is well.  We've been having a good summer so far here - lots of sunshine lately and not quite as ridiculously hot as it was at the beginning of July so it's been livable.  The first bit with the heat warnings every day got to be a bit much for my liking, especially when the house gets so hot and then just will not cool down, but thankfully we seem to be past that and into the just enjoyable kind of summer weather.  Mind you if the mosquitoes could take a leave of absence for a bit, I'd greatly appreciate it.  Also the deer... I have a resident deer that lives a lot of her life in my yard and seems to firmly believe that I planted the garden for her personal dining enjoyment, which is getting rather annoying to say the least.  She was in there again yesterday noshing on the beets and chard.  The only thing she's left untouched is the corn, the hot peppers and oddly enough the lettuce.  But other than those two aggravations, we've been really enjoying summertime.  It's such a relief to have the crazy learn from home school year done and not have to think about it for a while! 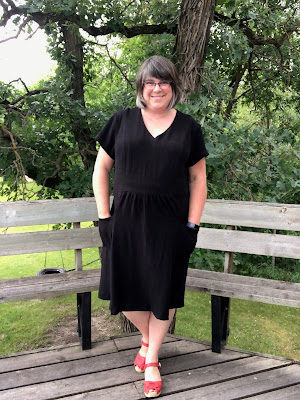 I've also been doing some sewing in small chunks of time.  If you follow my Instagram you'll know that right now I'm in the midst of sewing a bathing suit that has given me all kinds of headaches and fits, but before starting that project, I had the opportunity to test a new pattern for Itch to Stitch* again.  I've declined all testing opportunities since late winter because I just didn't have the time nor the brain power to do a proper job of it, so I was really happy to be able to jump in when the testing call came out for the Celeste Dress! 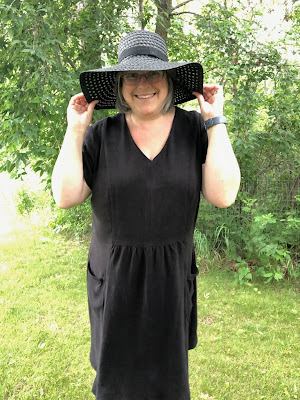 The Celeste is an easy breezy kind of summer dress.  It has princess seams, short sleeves and a v-neck along with fantastic pockets and an interesting gather detail at centre front.  You have the option of putting in a side zip if you need one, but I didn't think it would be necessary for mine and I was happily right.  (I did baste the seams and try it on first to be sure I could go without the zip.  No need to get completely stuck in a dress!  LOL)  It goes together quite easily, which is always lovely. I had a bit of an issue sewing the facing in the front, but that was more down to me being stubborn to the point of ridiculous.  Once I used some common sense things went much better. 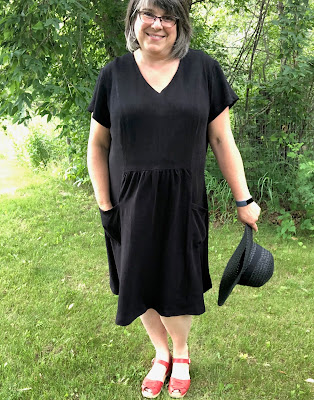 For my Celeste, I used a linen blend with a slight crinkly texture to it.  It had been labeled as linen/cotton, but it really does behave and feel far more like a linen/viscose, so I have my suspicions that the tag may have been incorrect.  It gave my dress a more drapey look to it, which I'm absolutely fine with!  I did lengthen the bodice on mine, which in hindsight maybe I didn't need to do or do quite so generously at least, but the curve at the waist would've hit in a weird spot for my actual waist had I not I think.  It means my gathers seem to sit a bit lower than most other testers, but I don't mind.  I like where it sits for me.

I will definitely be wearing this dress a lot.  It's cool and comfortable and as a bonus can withstand strong winds without the skirt blowing over my head.  (Always such a bonus here on the prairies where it seems to be windy almost all the time lately!)

If you're wanting to pick up a copy for yourself, you can head on over to the Itch to Stitch site.  Celeste is, of course, on sale for the release week! 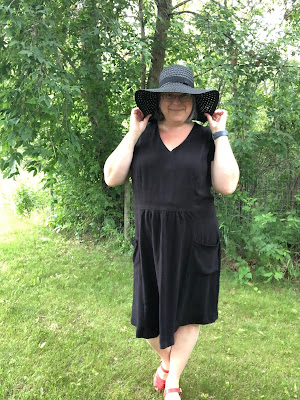 Posted by prairiegirl at 9:01 AM